After much anticipation and preparation, the big day of the Public Opening of the Heaven and Earth exhibition in Wrexham arrived. The exhibition consists of works from the Methodist Collection of Modern Art, which has been described  as ‘the most significant denominational collection outside the Vatican’ and is shared between two sites, Oriel Sycharth Glyndŵr University and the Methodist Church in the town centre. It includes over forty modern works of art on Biblical or religious themes, each one thoughtfully placed to inspire thought and discussion.

Oriel Sycharth was jam packed on the opening evening on 19 January. The varied programme included choral singing and talks by those representing the partners involved in staging the exhibition together with guest speakers. One such speaker was Mel Gooding, an art critic who is the son-in law of Ceri Richards, whose work Supper at Emmaus is seen in all the publicity for the exhibition, and although he admitted to being am atheist, he succeeded in conveying the spiritual nature of the works he referred to – we almost had a sermon!

Later in the Church, Sarah Middleton, a Trustee of the Collection shared the story of the Collections’ roots in Wales together with the many other links with Wales as she launched the bilingual booklet ‘The Methodist Collection of Modern Art in Wales’ and a copy was presented to the Rev Jennie Hurd on bahlf of Synod Cymru and Wales Synod. 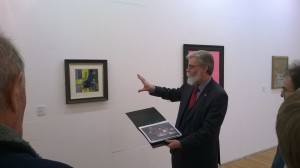 A week later a Welsh guided tour of the exhibition was led by Andrew Parry, Head of Welsh Language and Affairs, Glyndŵr Univeristy. His knowledge of the works was comprehensive and extremely interesting and he succeeded in drawing the visitors into the world of the pictures in a real way. This was no surprise since he had managed to lead a virtual guided tour on Dewi Llwyd’s radio programme the previous day! 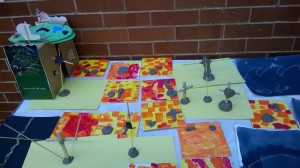 On Saturday 28 February a bilingual Messy Church based on some of the works was held at the Church. Through this event the exhibition was presented to a new audience with people of different ages and backgrounds. The afternoon was led by Luke Curran and Delyth Wyn Davies. Six main activities to enable people to respond creatively to the pictures were set out on tables and everyone could visit any table to enjoy creating something and chat and then to move on to other activities. A wide variety of experiences was provided with opportunities for modelling, painting and collage making, reflecting the styles as well as the themes of the pictures. This was followed by circle time to give everyone the opportunity to share with the rest what they had done and together with their feelings. Then everyone made a ‘person’ in preparation for the Worship based on ‘The Five Thousand’. Luke told the story of the feeding of the five thousand in the style of Godly Play with everyone contributing their ‘person’ as a character in the crowd. The Messy Church ended in the usual method of sharing a meal, continuing with the theme of the Worship with bread and fish! 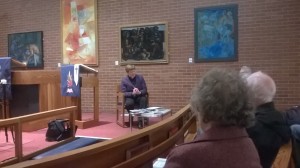 Many people representing churches of different denominations came to the Welsh language meeting in the Lent series ‘Stages of the Way’. This was led by the Chair of Synod Cymru, Rev Jennie Hurd on the theme of anger, starting with our own experience of what makes us angry before considering Jesus’ anger in the story of the Clearing of the Temple. We had the opportunity to explore and discuss anger in the pictures in the church before moving on to focus on one picture, Clive Hicks-Jenkins’s painting depicting the story of the woman caught in adultery. We were  challenged to consider who is really being judged and where are we in the picture. 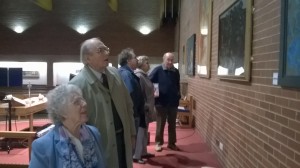 An additional Welsh language guided tour led by Andrew Parry was held on Tuesday 17 March at the request of some who had been unable to attend the first tour. Andrew’s contribution to the Welsh events and expertise in the arts is appreciated. 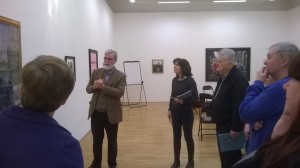 The last Welsh language event was the ‘Words of Art: Art of Words’ workshop led by Mererid Hopwood on Saturday 21 March. We had an interesting afternoon with Mererid at Oriel Sycharth as she shared her enthusiasm for poetry in response to art and offered guidance as we start writing poetry. She showed us ‘Landscape with the Fall of Icarus’ by Pieter Bruegel and recited W H Auden’s poem ‘Musée des Beaux Arts’ with his response to it. Everyone was asked to choose a painting in the exhibition which has drawn our attention and Andrew Parry explained the background of those paintings. Mererid shared some ideas about poetry writing and we looked at accents in ‘cynghanedd’. We were then asked to write a few lines in response to a painting. We read our work out loud and were given further tips to improve our work by Mererid. Jennie Hurd thanked Mererid for her guidance and for a  most enjoyable and inspiring afternoon. 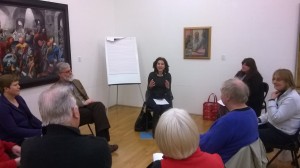 The exhibition closes on 26 March but it is hoped that this exhibition has encouraged churches to organise activities which use the arts to reach out into the community and that some will consider inviting the Collection to be exhibited in their area.